Sponsors help us to run the Business Improvement Network by providing event space or help with the costs of running events. London Irish and Marshall Motor Group are our sponsors in 2019.

Ex Rugby International Bob Casey played at London Irish for ten years, before becoming the CEO at this club. Bob played for Ireland and Barbarians during his career.

London Irish Rugby Club is nearly 120 years old and have just been promoted back into the Premiership. London Irish moved into their brand new £12 million training complex in the summer of 2014 to begin the new era of this Club.

The 63-acre site at Hazelwood is four times the size of the Avenue training facility and features 17 pitches, five full-size pitches, one of which is an artificial 4G surface, and 12 junior pitches. The clubhouse is state-of-the art and includes elite equipment required for a professional rugby team.

Hazelwood, just off junction 1 M3, has a huge free car park and excellent hospitality facilities, which the club have given us for the BIN event, June 27th. Sunbury and Upper Halliford train stations are within a few mins walk.

Marshall are the 7th largest Automotive distributor in the UK but the fastest growing, having gone from 300M to 2.3B in just 8 years through an aggressive acquisition strategy. Marshall’s strategy is to partner with the right brands such as JLR, Mercedes, BMW and the Volkswagen Group. Having gone through an IPO in the last 18 months and with 4,200 colleagues it is now an industry powerhouse with a clear vision to not necessarily be the biggest, but to be the best. Marshall’s success lies in the development of its people and its rich cultural outlook and clear goals for success.

On June 27th we will meet automotive Industry professional Andrew Lean, who leads Marshall’s £400M Volkswagen Division, employing around 450 colleagues and delivering around 11,000 cars and vans per year, as well as over 100,000 workshop hours. Andy is a specialist in ‘change’ and also reluctantly a specialist in crisis management, having led the division through 2016’s ‘emissions crisis’. He is Vice Chair of the National Manufacturer Dealer Council and with a bucketful of industry awards and nominations and he is a recipient of Volkswagen’s ‘Diamond Pin’ career award, an exclusive and coveted membership indeed.

Get to know your host

PJ Stevens is an experienced facilitator who specialises in people and business improvement. He champions Open Space as a forum for relevant business discussion and is committed to collective brilliance. He is in the room to facilitate and help members to Connect, Share and Learn ... to improve business and businesses. 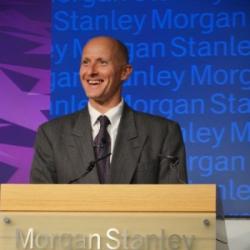