Feedback: the single most effective way to Improve Business 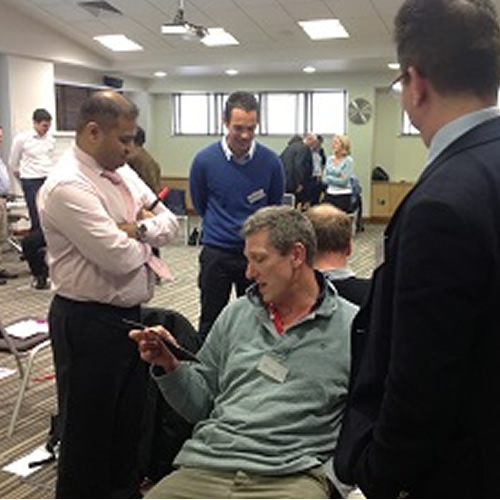 Have you ever played ‘Hide and Seek’ with children and used the terms ‘Hot and Cold’ to give them a clue or guide to help them find the hidden item? Without basic feedback in the game or business, people are walking blind, or at the very least hampered in their ability and progress.

There are many reports and pieces of research that note Feedback can improve: motivation, learning, personal development, transparency, relationships, trust and performance at the individual, team and at the organisational level.

Sara Canaday, author of You – According to them, notes ‘’I've seen remarkable proof that gathering feedback is the powerful (and often overlooked) fuel that accelerates careers.’’

What’s the cost of not giving feedback? In a recent piece of work with a large client, they noted the ‘costs of not receiving feedback’ for them include: Chinese whispers, fear of the unknown, exclusion, I don’t matter, loss of perspective, loss of performance, demotivation, missed delivery dates, hamper career development, losing clients, negative worries, no creativity, poor innovation and even paranoia.

If feedback offers insight, a different perspective, opportunity for growth and many other benefits, and the cost of not getting it is so significant, why do people tend to shy away from giving feedback?
The same company referred to previously answered this question, with the following selection of examples: we don’t want to upset anyone, feedback is like criticism, fear rejection, fear of being fired, it’s not good manners to point out what someone is doing wrong, I don’t want to come across as a know-it-all, this person never listens.

I ask often ask groups a question about feedback and their culture, related to business improvement: If I walked out of lunch with tomato ketchup all down my shirt, would you tell me?  I’m amazed how many people say no, and that they would sooner let me walk in to a board meeting or back on stage smeared in red sauce, than stop me and give me the feedback.  Their rationale is usually they don’t want to embarrass me…. As if the alternative wasn’t embarrassing!

I recently shared some feedback with a board member that arose from part of the exit process with an employee. When I offered the feedback the director did what I have seen in far too many others, he said that it sounded like a disgruntled employee, and dismissed the feedback, because ‘it can’t be wrong’. What was he doing – something we call DJE; defend, justify and explain. Immediately he has defended his position. What was most interesting from my perspective was the director seemed not to listen nor did he ask a single question. There was no effort to explore, to understand or gain value from the feedback.

Conversely, a chum of mine in Formula One tells a great story about feedback and performance improvement. A young engineer walks up to the pit crew, who were practising pit stops in the factory, and at the appropriate moment said ‘I think I can help you improve your pit stop by 1/1000th of a second’. The team could be forgiven for laughing or even ignoring him, but instead they ask how? The answer was simple, by changing some of the internals of your wheel-nut guns with different materials, the gun should run fractionally faster by virtue of the materials staying fractionally cooler…..shall we try it?

What do you notice in these two real examples here, and what is the cost / benefit in both upon business improvement?

Many sectors of society seek out feedback like children and champion sports stars. So why do so many businesses and adults see feedback as criticism or unwanted interference? There are times when ignoring or discounting feedback is absolutely right, I forget who told Bruce Springsteen that he couldn’t sing or how many people rejected JK Rowling’s story of a young wizard with a scare on his forehead, and yet both of these mega-stars seem to have done pretty well for themselves!

These examples are fairly extreme and simply made to offer a point, and I am equally sure that these people have had other feedback that they have listened to and incorporated.

In a well reported HBR article, it stated that some 82% of Directors said they gave effective feedback, whilst of the corresponding staff interviewed only 23% said they received feedback.  Why? You might be thinking of reasons such as poor timing, lack of skill, poor relationships, histrionics and so forth. Given that, what is the antidote to this gap in giving and receiving feedback? The short answer is to ask for feedback, don’t wait to be given it, but invite it. When we ask for feedback, our mind set is different, we listen, and we are open and ready to receive the message (feedback). By asking for feedback, it gives the other person permission to share their feedback, and creates a culture of trust and improvement.

If feedback is the single most effective way of improving business, then asking for feedback elevates it further still making people and business improvement more widespread and sustainable.

Some years ago I was introduced to a game called Configurations, which highlights the need and value of feedback, and is an excellent activity to prove improvement through feedback, live. In fact, I thought it was so good, I bought Configurations to use with clients to help them improve self, others and business.

Playing Configurations will not teach you the skills to give and receive better feedback, but it will highlight the need and importance, and change your view of giving and receiving feedback, forever!

One thing I strongly believe in is that if you, as leader, start asking for feedback, you will begin to create an environment where people are given permission to give and receive more frequently which will directly improve the delivery of your business strategy(s).

PJ Stevens is an expert in organisational change, performance and improvement, with 20 years experience. He is chair of the business improvement network.